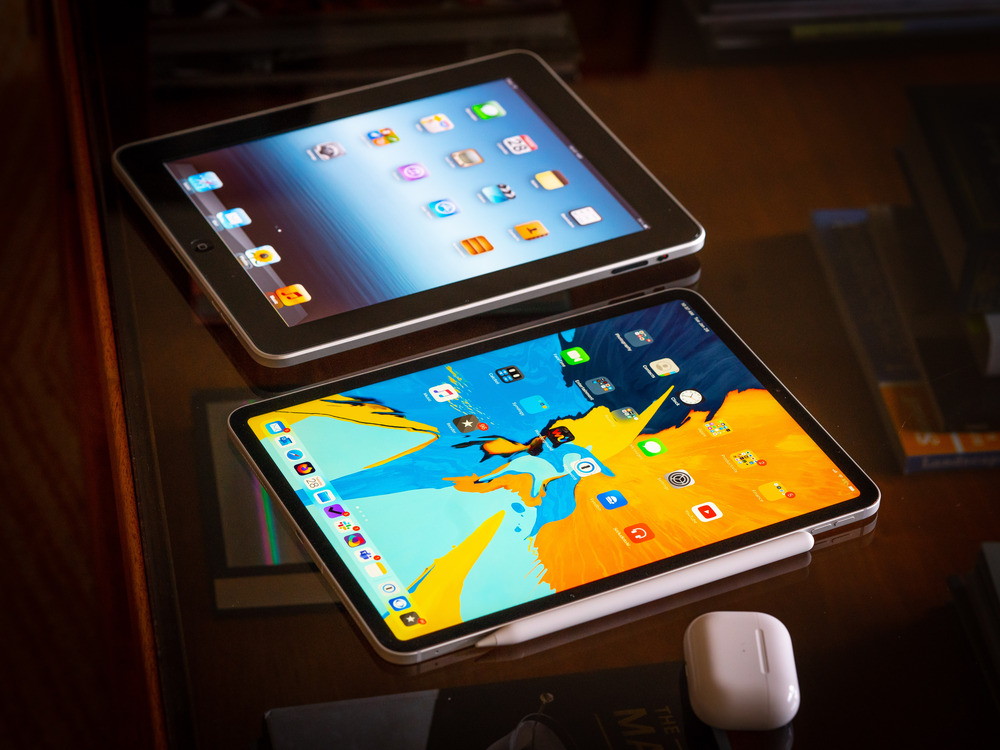 I remember buying the original iPad pictured above on release day, and being amazed at how compelling “just a big iPhone” was. It was better than Steve Jobs made it out to be; the reality distortion field wasn’t just working overtime in his keynote introducing it.

Today, I use the other iPad pictured above—an 11" iPad Pro—and it’s almost as important in my daily work as my Mac is. I spend a lot of time in meetings and I rely on the iPad as my main device for much of the day. The iPad Pro hardware is wonderful: it’s fast, solid, and versatile.

However, I’m a long-time Mac person, and frequently wonder if there were a small, portable Mac made like this iPad, if I’d opt for the Mac instead.

Ten years later, though, I don’t think the iPad has come close to living up to its potential. By the time the Mac turned 10, it had redefined multiple industries. In 1984 almost no graphic designers or illustrators were using computers for work. By 1994 almost all graphic designers and illustrators were using computers for work. The Mac was a revolution. The iPhone was a revolution. The iPad has been a spectacular success, and to tens of millions it is a beloved part of their daily lives, but it has, to date, fallen short of revolutionary.

Gruber also says, “software is where the iPad has gotten lost”, which I think is exactly right. He is particularly hard on multitasking in his piece, and while I agree that multitasking is a bit of a mess, it’s not at the top of what I think holds back the iPad.

For me, the biggest thing still missing is interoperability between apps. I recognize that the single-app paradigm has contributed to the security and the original simplicity of iOS, but if iPadOS is going to stretch to accommodate more powerful workflows, Apple has got to come up with better ways to let apps work together. They’ve made some concessions to this with Siri Shortcuts, but it’s still way too hard to put together a workflow that involves multiple apps.

With its beautiful screen, excellent performance, almost perfect form factor, and an easily best-in-class stylus, the iPad should be the centerpiece of a mobile photography workflow. But Apple hobbled it, forcing photos have go through the Photos app instead of being able to go directly where you want them to—say, Adobe Lightroom. This was lifted just recently in iPadOS, and while Lightroom now takes advantage of it, it’s clearly an early implementation. Imagine how much more robust this could be if it hadn’t been arbitrarily limited for so long.

Even with this limitation lifted, taking a photo from Lightroom and dealing with another app or two—say Pixelmator or Flickr—still requires too many awkward visits to the sorely overloaded share sheet. Too often, this kind of workflow makes many copies of the photo, hidden away in the apps’ own sandboxes. This makes it hard to track, catalog, and archive the results.

That leads to another thing that was so overdue that it still hurts, also changed only recently: allowing better access to files on external storage, or even elsewhere on the iPad itself. Now being able to use the iPad with a more fully-featured Files app just underscores how much the iPad has been held back by the limitations of iOS.

Overall, the iPad is a wonderful device, and I’d be worse off in daily life if I didn’t have it. Hopefully Apple takes the bittersweet commentary that has been popping up around Gruber’s article on the iPad’s tenth anniversary as a sign that we see the potential, and just want to see iPadOS elevated to match the quality of its excellent hardware.