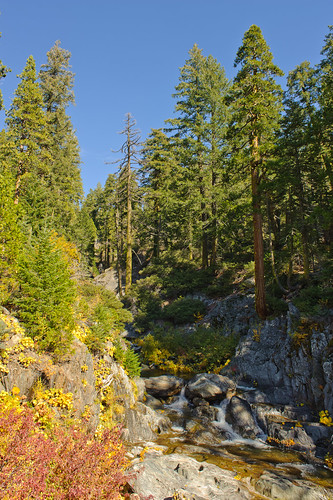 Josh and Jo, Erik and Elizabeth, and Shane joined Val, Ainsley, and me for a weekend trip. I towed the Airstream up and stayed at the Sierra Skies RV Park and the rest of the group stayed at Herrington’s Sierra Pines, in nearby Sierra City. Josh and Jo got there early enough on Friday to take the tandem out for a ride, while the rest of us arrived later that day. 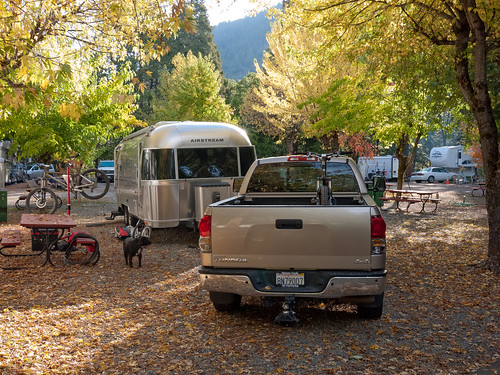 We did two rides on Saturday. The first had us doing Packer Saddle down Sunrise, Pauley Creek, Third Divide and First Divide. It was supposed to be a 10:30 AM shuttle, but it left late and we rode slowly, making us a bit late for our 3:00 PM shuttle for the second run. We left for our second run about 4 PM. 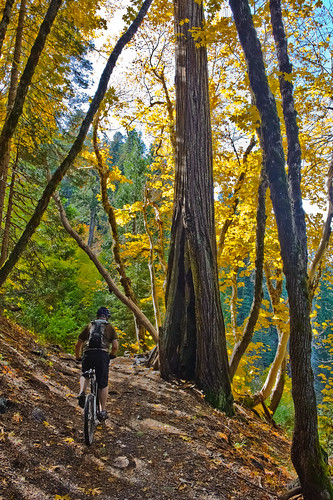 The weather didn’t disappoint. Blue skies, cool temperatures and tacky trails made these prime riding conditions. I brought my new Clik Elite Medium Nature backpack housing my SLR, hoping to catch some of the beautiful fall colors. That made for a heavy pack on my back all day, but I’m happy I did it in retrospect. 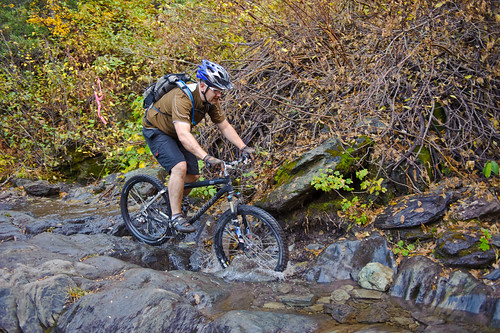 The second run was supposed to be Sunrise to Butcher Ranch to Second Divide to First Divide, but we were really running out of light. Jo had an early fall and I had 3 (!) flats, which conspired to slow us way down. We rolled into Downieville in complete darkness after riding by braille down the road, bypassing First Divide completely and having taken the shorter Third Divide again.

Those of us who rode caught up with the non-riding contingent at a local restaurant (I forget the name, but it was the only one open this late in the season), which was pretty good food. After having been in the saddle all day, we all really dug in. I had a rib-eye steak that was really very good. 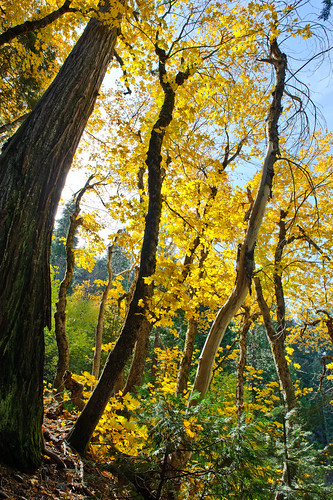 Sunday saw Erik and Shane flake and head out early, while Josh, Jo and I headed up for a run. Josh and I headed down Sunrise and Jo went down the road, ostensibly to meet at the intersection where the trail splits to either Butcher or Pauley. Jo passed the sign and rode on, causing Josh to head out looking for her. We spent about an hour looking for each other, but connected up and continued on. We took a slow pace down, catching Butcher Ranch and finally hitting Second Divide. It was getting late after that, so we caught the road instead of First Divide and then parted ways. 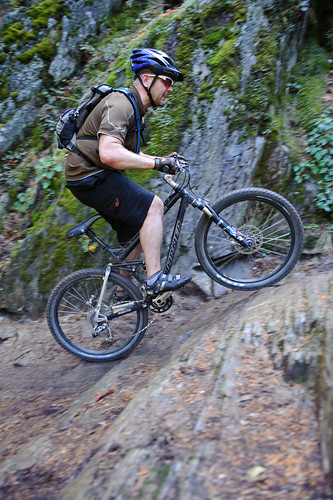 These photos and more can be found in my Flickr Photoset for the trip.